The Warsaw Village Band was found in 1997 as a response against the narrow-mindedness of the music scene which they believed was leading to the destruction of human dignity. That is why they turned to their roots in search for musical inspiration by “exploring the folklore and archaic sounds of their ancestors and instincts” (The Kennedy Center, US). In this sense, their interview from the Folk World is quite explanatory: ‘We travelled from village to village, seeking out the old people; we listened to their music and their stories. What surprised us most was that no one else in the villages is interested in this music anymore. These are old people, and when they die, the music will die with them.‘

The WVB made its first major spectacular performance in 1999 at the Sopot Festival on a stage it shared with world stars. JARO producer Ulrich Balss, who was represented at the festival with several artists, discovered this young band with the fourteen-year-old Maja Kleszcz on the cello. It was not until in the spring of 2003, however, that the second CD “People’s Spring” was released by JARO and the band could step on the ladder of fame.

In early 2004, they were presented with the BBC WORLD MUSIC AWARD 2004 in Edinburgh. In 2006, they won the Polish Grammy “Frederik Award”. Nowadays, Warsaw Village Band counts about 3 “Frederik Awards” in its arsenal. These distinctions were followed by composition commissions for video games and movie sound tracks, theatre productions and concerts all over the world. The British BBC honored the band with a sixty-minute portrait which has since been broadcast in several European countries. Their CDs were licensed in America and Japan, and the Warsaw Village Band is meanwhile the most successful Eastern European ensemble outside the mainstream. The New York Times once referred to them as one of the most important bands on the World music stage comprising “the sound of globalization!”.

The Warsaw Village Band is a symbol of young, intelligent Eastern European music which combines tradition with modern elements and is capable of eliciting enthusiastic responses from rock audiences and traditionalists alike. The Folk World Magazine described their style as: “based on the so-called white voice, a traditional vocal technique originating from the shepherds´shouts, always on the top of their voices. This is combined with the traditional techniques for playing the old Polish instruments.”. The Nordwest-Zeitung (Germany) referred to them in 2003 as: “One of the new promising New Folk Bands from Eastern Europe. WVB perform folk music combined with medieval music and a pinch of ‘Apocalyptica'[…]Violins sing, a cello is played by brute force, drums resound into the farthest corners.”. And the publication was right: WVB’s music has truly managed to establish itself in Europe and the world. In London, they were even spoken of, among other things, as the Polish Pogues. Likewise, the German review from Rheinische Post indicated: “The success of the Warsaw Village Band stems from its musicians’ great love for their national musical heritage and their will to preserve the old musical traditions. For these musicians, however, preservation does not mean restoration but – as we have experienced with ‘The Pogues’ or ‘Les Negresses Vertes’, for example – reanimation, i. e. the transportation of the old songs’ spirit into the here and now. Polka gets a shot of Techno, and despite the acoustic instrumentalization, the band conjures up sounds that have electronic impact.”

In one of their gig reviews in Leeds at Courthouse it was stated that: “just listing the members of the band gives no real indication of the variety of sounds they produced, it was fantastic; three vocals singing alternately in unison and harmony; haunting melodies, electro-trickery, frantic percussion using all the above listed instruments[…]Get on their website, they are touring the world at the moment, see them, I defy you to tell me that they are not brilliant.”(Francis Denning). All these elements comprise their ‘hardcore folk’ style. In this sense, BBC 3 stated that WVB’s “ signature sound is indeed formed by uncompromising traditionalism, updated with a guttural punk rock aesthetic”.

The WVB had concerts in places as far-flung as Alaska, Japan, Taiwan, Portugal, Moscow and Paris reaping exuberant reviews from both the critics and the audience. All in all, they have managed to performance more than 500 concerts on four continents in more than 30 countries.

2017 will be a very active year with the new album “Sun Celebration”. The band will tour spring 2017 Australia & New Zealand.

“A very mature work with lots of energy. Another proof that we should have a closer look towards the Polish scene.” Folkworld

“Proud, inquiring, revolutionary, masterly performed, imbued with a youthful enthusiasm that revitalizes you on every listen and manifests why it still means something to be searching for music all over the land, instead of being content to listen to mainstream pop.” Rootsworld

“Traditional Polish songs, with their cutting vocals and meshed fiddles are  the foundation of Warsaw Village Band’s repertory. But while their lineup is primarily acoustic – hand drums, hammered dilcimer, violins, cello – their sensibilities are modern. They hear dance -club drive and trancey echoes in the songs and they use recording studio techniques to heighten the central drones and eerie percussive sounds in their songs. Hints of reggae and guests like a scratching disc jockey should further infuriate purists”  The New York Times

“Poland’s Warsaw Village Band may be a folk music sextet, but that doesn’t mean it employs polite strumming and quaint melodies. Sunday evening on the Kennedy Center Millennium Stage, this three-woman, three-man ensemble used violins, dulcimer, cello, Polish frame drum, marching band-style baraban drum, and high-pitched vocals to showcase the unique, raw style they referred to as Polish “roots music from the ancient to the future.”
With the women upfront and the guys in back, the group featured songs from their two recent albums, “People’s Spring” and “Uprooting.” Although the one-hour set was often dominated by noisy waves of rhythmic bowing from the two violin players, their string work frequently lacked melodic variety. But the other instruments, and especially the haunting female vocals, took up the slack.” Washington Post 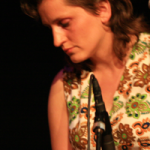 Magdalena comes from Swidnik, in the Eastern part of Poland, where she was born in 1978. She finished her musicology studies in Warsaw as well as the percussion class at Lublin music high school. In course of her studies she was invited to Finland to the Folk Instruments Institute where she discovered a lot of similarities between Polish and Scandinavian music. She plays the dulcimer, a very rare Polish instrument. There are just a few dulcimer players in the Polish music-scene. Magdalena has joined the WVB in 2002. 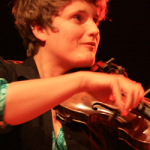 Sylwia was born in Warsaw in 1974. After having finished the violin class at high music school and musicology studies, she started working with several Polish folk groups and eventually joined the WVB in 2000. She is one of the best violinists of the Polish scene. In 2002, she was awarded the “Golden Violin” during the New Tradition Festival in Warsaw. Her way of playing shows how much she has been inspired by jazz music. She also plays the old Polish fiddle, a unique instrument similar to the Indian sarangi. Now, the sound of her violin has become a characteristic trace of the WVB sound. 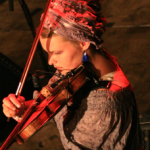 Ewa was born in Warsaw in 1985. She was a pal of Maja’s at primary school, so she had direct contact with the various sounds of world music. In practice, however, for a long time she preferred classical music. She was a student of the Frederic Chopin University of Music. She participated in various music workshops and as an orchestra member performing across Europe and was engaged in polish off-cinema venues which gave her an opportunity to get experienced in creating film music. She is a band member since 2008. 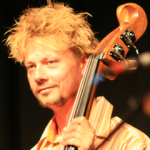 Pawel was born in 1971 in Kielce – halfway between the two Polish capitals Warsaw and Krakow. Educated as a classical and jazz musician, he joined the group in February 2009. His electric contrabass has changed the sound of WVB. He has played many different styles of music, but always attracted to world music, being a member of such bands like Trebunie Tutki, Mamadou Diouf & Kinior Orkiestra. For several years he accompanied one of the biggest polish blues stars – Tadeusz Nalepa. 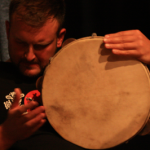 Maciej  was born in Warsaw in 1975. He is the founder of the WVB and a graduate of the Warsaw University, carrying a degree in Political Sciences and Journalism. At the beginning of his musical career, he played in several independent punk rock and hard core bands, (incl. Antidotum as well as the folk band Yuva Shakti, Wianki Samagri). Furthermore, he worked as a journalist and co-worker for publications such as “Sztandar”, “Antena Krzyku”, “Nowa Wies”, “Machina”, “Gadki z chatki”, “Puls Swiata” and for the following radio stations – Polskie Radio, Jazz Radio, Las Vegas. Maciej also was the author of the “Muzykanty” – series, presenting profiles of traditional Polish musicians and folk bands. Since 2000, he regularly has been organizing the „Muzyka w Muzeum” concert series, taking place at the Ethnographic Museum in Warsaw – www.muzykawmuzeum.serpent.pl. In addition to that, he inherits the position of an Ethnic music populariser – in Europe as well as in Asia, and is a member of the Masala sound-system and co-creator of the electro-ethnic Village collective. 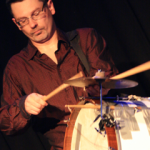 Piotr was born in Warsaw in 1972. He is the band´s most educated member: he finished the percussion class at the Frederic Chopin Academy of Music in Warsaw and has been a music teacher for primary and secondary school. He played with philharmonic and chamber orchestras as a soloist (he used to play his wife´s compositions on marimba, for instance). After he had left the academy, he started his roots music career. For a few years, Piotr has been a member of “Zespó Polski”, a legendary Polish folk group. With them, he toured through countries like Japan, Germany, France and many more. As a part of the the Warsaw Village Band, his drum performance is quite essential. Among other basic musical features it forms the band´s musical heart.

This Is A Custom Widget

This Sliding Bar can be switched on or off in theme options, and can take any widget you throw at it or even fill it with your custom HTML Code. Its perfect for grabbing the attention of your viewers. Choose between 1, 2, 3 or 4 columns, set the background color, widget divider color, activate transparency, a top border or fully disable it on desktop and mobile.

This Is A Custom Widget

This Sliding Bar can be switched on or off in theme options, and can take any widget you throw at it or even fill it with your custom HTML Code. Its perfect for grabbing the attention of your viewers. Choose between 1, 2, 3 or 4 columns, set the background color, widget divider color, activate transparency, a top border or fully disable it on desktop and mobile.
Diese Website benutzt Cookies. Wenn du die Website weiter nutzt, gehen wir von deinem Einverständnis aus.OK